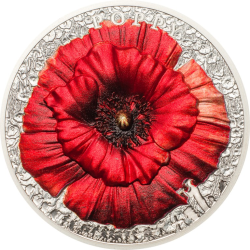 An ultra high relief (smartminted) poppy with with detailed, yet subtile, soldiers at the bottom remembring the fallen of World War 1. The poppy is the icon but a great gift throughout the year. Minted on a piedfort 2oz with the latest Smartminting technology giving it a natural look! A coin you will remember!

A poppy is a flowering plant in the subfamily Papaveroideae of the family Papaveraceae. Poppies are herbaceous plants, often grown for their colourful flowers. One species of poppy, Papaver somniferum, is the source of the crude drug opium which contains powerful medicinal alkaloids such as morphine and has been used since ancient times as an analgesic and narcotic medicinal and recreational drug. It also produces edible seeds. Following the trench warfare in the poppy fields of Flanders during World War I, poppies have become a symbol of remembrance of soldiers who have died during wartime.