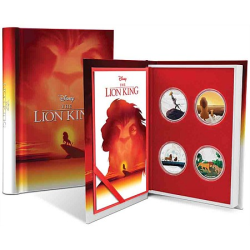 This coin collection for The Lion King celebrates 25 years of the much-loved Disney classic, which was released on 15 June 1994.

There are four 1 oz pure silver coins in the collection. Each coin features a full-colour image of Simba in a key scene from the film namely; Simba surveying the Pride Lands with his father Mufasa, Rafiki lifting Simba for all the kingdom to see, Simba nuzzling Nala, singing with friends Timon the meerkat and Pumbaa the warthog. Background elements have been engraved for contrast.

Each coin features the Ian Rank-Broadley effigy of her Majesty Queen Elizabeth II on the obverse and the mintage year 2019, confirming its authenticity as a 25th anniversary legal tender memento.

All four coins are nestled in red velvet inside story-book style packaging decorated with stirring images from the movie. A separate Certificate of Authenticity is placed inside the front cover confirming the worldwide mintage of only 5,000 coin sets.

This unique set makes a great keepsake for any fan of the movie or coin connoisseur.