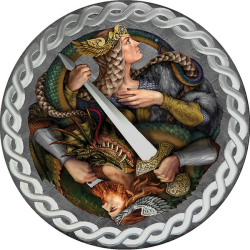 Mint21 released a truly unique coin struck of 1 oz of pure Muonionalusta meteorite. Showcasing the legendary figures of Siegfried and Brunhild, this coin refers to one of the modern interpretations of “The Song of the Nibelungs”, the famous European epic poem. Considering Germanic-Scandinavian roots of the story, Muonionalusta meteorite was chosen as coin material due to the fact that it was found in northern Scandinavia.

The Legend
According to this version, Siegfried and Brunhild set off in the quest for a fallen star and in the fight for unearthly stone they eventually fell in love with each other. As a symbol of their vow to meet again and marry, the heroic couple divides the meteorite into halves and forges the weapon – a sword for Siegfried and a spear for Brunhild.

With her hand resting on her heart, Brunhild gazes at the star. As being once foretold, Brunhild should marry the one who defeats the mighty maiden in the battle.  Siegfried, known as the hero who slayed the dragon Fafnir and possessed the ring of the Nibelungs, is depicted with his trophies. His victory allows him to gain a position in the royal court and to marry Brunhild. At the same time, Siegfried possesses the dragon’s treasures, and this fact throws a curse on him and his beloved. This results in his death after court intrigues.

The Artwork
Paying homage to the legend, the beautiful artwork on the reverse tells us something more, rather than just a depiction of saga heroes. The way they are portrayed echoes with the conception of two opposite entities in a state of a constant struggle. The idea is enhanced by a central relief element – the weapon which compositionally connects the heroes, at the same time dividing them and thus giving a hint on their further destiny.

If you love exclusive coin themes, if you enjoy legends and myths and if you appreciate the beauty of meteorites, this coin is your best choice!