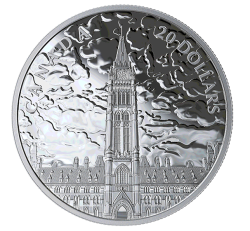 Northern Lights on Parliament Hill is a magical sound and light show that attracts over 200,000 spectators in Ottawa each year. The imagery projected onto the Peace Tower in Ottawa is a dream-like voyage through the wonders of Canadian culture and history that you'll want to keep with you. The Royal Canadian Mint has created a coin to eternalize this enchanted moment. The design features the unique Colour Reveal technology, a Royal Canadian Mint first! Using a black light to highlight the coin, the Peace Tower glows with Northern Lights in the dark, just like Parliament Hill at night!

Your coin's design is based on a photograph by Matt Eggink of Parliament Hill's Peace Tower and features a unique Colour Reveal that lights up by use of a black light. These colours are based on the projections on the Peace Tower in the final section of Northern Lights, the sound and light show on Parliament Hill. The obverse design features Her Majesty Queen Elizabeth ll by Susanna Blunt.

“I thought it was important to capture a perspective that is realistic to a spectator's view as they watch the light show.” Matt Eggink, Artist

Did you know…
Packaging:

Your coin is encapsulated and presented in a Royal Canadian Mint-branded clamshell with a black beauty box.