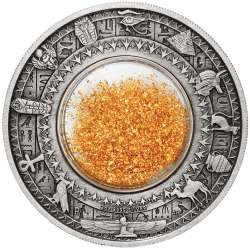 Instantly captivating, this unique coin is a wonderful collectable for those fascinated by the ancient Egyptians and the significance of gold to their culture, featuring:

Gold has held humans in awe for centuries, dating back to some of the earliest known civilisations. The ancient Egyptians considered the lustrous metal to be the skin of their deities, particularly the sun god, Ra. Worn by royalty and priests, the precious substance was often featured in funerary art, most famously the death mask of Tutankhamun who reigned from approximately 1336-1327 BCE. This image of his mask is featured on the reverse of this stunning antiqued coin, along with other Egyptian hieroglyphics and symbols associated with the golden metal.

The reverse of the coin features gold particles encased in Perspex, surrounded by representations of Egyptian hieroglyphics and symbols. These include sacred images denoting protection, eternal life and royalty such as the Eye of Horus, a pyramid, a vase, the goddess Isis, a falcon, an ankh hieroglyph representing life, a sarcophagus and a scarab. Also included in the design is the inscription ‘2oz 9999 SILVER’ and The Perth Mint’s ‘P’ mintmark.

The coin is housed in a pyramid shaped display case, the top of which opens to reveal the coin. The surface of the pyramid is decorated by hieroglyphics and features a coloured winged scarab beetle design. The ancient Egyptians revered this insect as the divine manifestation of the early morning sun, Khepri, and believed the god, in the form of the beetle, rolled the disk of the rising sun over the eastern horizon at daybreak. Packaged within a textured box stamped with the Golden Treasures scarab beetle design, the coin is accompanied by a Certificate of Authenticity.