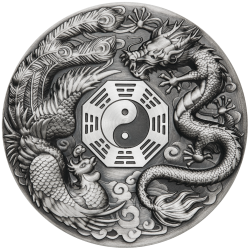 In traditional Chinese culture, the dragon symbolises power, wealth and good fortune, while the phoenix is regarded as an immortal bird whose rare appearance is believed to foreshadow harmony. In feng shui, these mythical creatures are considered perfect matches for one another. The phoenix is considered ‘yin’ while the dragon is ‘yang’ in the Chinese philosophical account of natural balance and interdependence.

This remarkable 5oz silver coin depicts these ancient symbols in sublime detail and further honours Chinese culture with a mintage of 388. The number eight is considered extremely lucky thanks to its similar pronunciation to the Chinese word for good fortune or money.

The coin’s reverse portrays detailed representations of a dragon and a phoenix with a stylised representation of clouds and mist in the background. The mythical creatures encircle an image of the bagua, a motif incorporating Taoist trigrams, or symbols comprising three lines. Each trigram represents one of eight fundamental elements or concepts: heaven/sky, lake, fire, thunder, wind, water, mountain or earth. Within these is the yin yang symbol denoting universal balance.

In keeping with its ancient themes, the coin has been ‘antiqued’ by hand to give it a unique finish conveying the surface abrasions of an aged artefact. As a result of this treatment, the appearance of each coin in the limited mintage may vary.

Each coin is housed in a classic black display case within a beautifully illustrated shipper and is accompanied by a numbered Certificate of Authenticity.