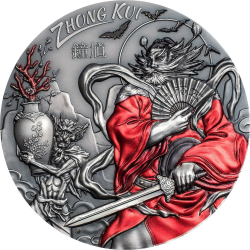 First coin in a new series: Asian Mythology. Smartminted(r) on a 55mm 3oz silver blank in high relief. Antique finished with partial color (red) and partial proof finish (the sword). Make sure to get the first coin in the series as just 333 pcs are released.

Zhong Kui is a deity in Chinese mythology. Traditionally regarded as a vanquisher of ghosts and evil beings, and reputedly able to command 80,000 demons, his image is often painted on household gates as a guardian spirit, as well as in places of business where high-value goods are involved.

hong Kui's popularity in folklore can be traced to the reign of Emperor Xuanzong of Tang China (712 to 756). According to Song Dynasty sources, once the Emperor Xuanzong was gravely ill. He had a dream in which he saw two ghosts. The smaller of the ghosts stole a purse from imperial consort Yang Guifei and a flute belonging to the emperor. The larger ghost, wearing the hat of an official, captured the smaller ghost, tore out his eye and ate it. He then introduced himself as Zhong Kui. He said that he had sworn to rid the empire of evil. When the emperor awoke, he had recovered from his illness. So he commissioned the court painter Wu Daozi to produce an image of Zhong Kui to show to the officials. This was highly influential to later representations of Zhong Kui.