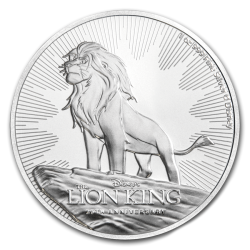 This stunning .999 fine Silver coin, celebrating the 25th anniversary of Disney's The Lion King, features an officially licensed image of Simba on Pride Rock. The Lion King was first released in 1994 and is one of the most successful movies of all time.

There are only 25,000 coins produced worldwide, 10 times lower than the maximum mintages set on previous licensed Silver bullion coins from New Zealand Mint. With such a low mintage, take advantage of the opportunity to own this officially licensed Lion King Silver coin.

Coin Highlights:
The Lion King was an iconic Disney movie released in the mid-1990s. It has a been a favorite of movie-lovers ever since. Add this limited mintage 1 oz Silver coin to your cart today to commemorate the 25th anniversary of The Lion King!

THE LION KING:
Disney's The Lion King is an animated film first released to the public June 24, 1994. Winning two Academy Awards for the music and a Golden Globe for Best Motion Picture, The Lion King continues to be a classic film for children and adults alike. The story follows a young lion cub, Simba, and his life through adulthood. The movie is set in the Pride Lands of Africa, where lions rule the kingdom. It was announced a remake of the film is set to launch on July 19, 2019.