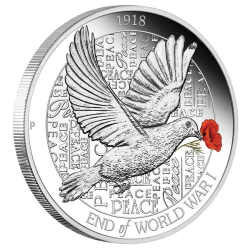 The bloodshed of World War I ended in 1918 at the 11th hour of the 11th day of the 11th month. To mark the cessation of hostilities 100 years ago, The Perth Mint offers this carefully considered numismatic tribute honouring the courage and sacrifice of those who suffered the conflict’s unremitting brutality at Gallipoli, in the Middle East and on the Western Front.

The coin is meticulously struck from 1oz of 99.99% pure silver to our renowned proof standard combining a mirror-like polished background with delicately frosted relief.

The coin’s reverse portrays a dove which has for millennia symbolised ‘peace’. The bird is holding another poignant symbol in its beak. Red poppies were the first flowers to bloom in the devastated battlefields of Western Europe and soon became universally associated with the act of remembrance.

Issued as legal tender under the authority of the Australian Currency Act 1965, the coin portrays the Ian Rank-Broadley effigy of Her Majesty Queen Elizabeth II on its obverse.

No more than 5,000 of these End of WWI 100th Anniversary 1oz Silver Proof Coins will be released by The Perth Mint.

Accompanied by a numbered Certificate of Authenticity, each coin in the mintage is housed in a classic textured display case and delicately designed shipper.