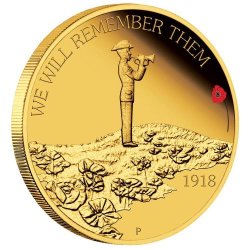 As part of the final year of our ANZAC Spirit 100th Anniversary series, this coin is a beautifully detailed tribute to the thousands of men who lost their lives on the Western Front.

Marking the centenary of the final months of World War I, the coin is inscribed with ‘1918 We Will Remember Them’ and depicts a lone bugler in a field of poppies, the flowers that were the first to bloom after the fighting in France and Belgium finally ceased.

The coin's reverse depicts a soldier playing a bugle in a field of poppies. The design includes a red poppy, the inscription WE WILL REMEMBER THEM, as well as The Perth Mint’s traditional ‘P’ mintmark.

Issued as legal tender under the Australian Currency Act 1965, the Ian Rank-Broadley effigy of Her Majesty Queen Elizabeth II, the 2018 year-date, and the monetary denomination are shown on the coin’s obverse.

The Perth Mint will release no more than 1,000 of The ANZAC Spirit 100th Anniversary Coin Series – We Will Remember Them 2018 1/4oz Gold Proof Coin.

Each coin is presented in a themed presentation case with the words ‘Pride’, ‘Respect’, and ‘Gratitude’ inscribed on the outside of the case, within an illustrated shipper, accompanied by a numbered Certificate of Authenticity.