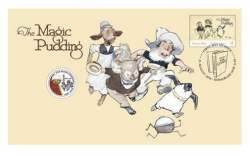 First published 100 years ago, in 1918, The Magic Pudding by Norman Lindsay (1879-1969) centers on a cantankerous pudding named Albert. Albert is magic in the sense that no matter how much you eat of him, he will regenerate, and being eaten is the only thing that makes Albert happy. Bunyip Bluegum (the Koala), Sam Sawnoff (the penguin) and Bill Barnacle (the sailor) are the Noble Society of Puddin'-Owners, who try to keep Albert away from the sneaky pudding thieves. Lindsay wrote the story in part to settle an argument as to whether children liked to read about fairies or food and as a catharsis from horrors of World War I. Set in the Australian bush and peppered with larrikin language, this classic Australian children's book is still in print and has been translated into several languages.

The coin is housed in an insert inside and Australia Post commemorative Envelope with a $1 The Magic Pudding Stamp.