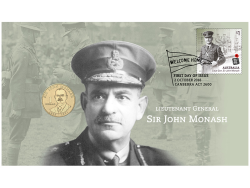 Sir John Monash was Knighted in 1918, for his outstanding efforts as a tactician in the First World War. His strategies and implementation of technologies enabled the 'Aussie' skirmishes to suffer much less casualties in war fronts then they would have without the influence of Sir John Monash.

He was an engineer before WW1, Sir John Monash introduced reinforced concrete into Victoria before serving. After the War he returned to Melbourne where he became Chairman of the State Electricity Commission of Victoria, whilst in this position he extended the electricity grid across the entire state of Victoria. In his later years he also became the Vice-Chancellor of the University of Melbourne.

Monash University In Melbourne is named in his honour.