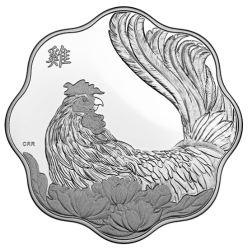 2017 Year of the Rooster Lotus Coin

The rooster knows how to strut its stuff, and this uniquely shaped coin celebrates people born under its sign. They are witty, confident, resourceful and observant—and will delight in this coin's portrait, complete with the Chinese character for rooster and five gladiolus flowers that represent the rooster's lucky number “5.”

Special features:
About the Design:

The reverse design by Three Degrees Creative Group commemorates 2017 as the Year of the Rooster with an intricate side profile view of its animal representative. Detailed engraving recreates the rooster's feathered appearance and captures the essence of the animal's character: observant, resourceful and self-assured. Other elements associated with this sign are artfully incorporated into the design—including the outline of five gladiolus flowers, which also represent the Rooster's lucky number, “5.” The reverse also features the engraved Chinese character for “rooster”.

Your coin is encapsulated and housed in a silver satin-like covered case with a custom red sleeve.