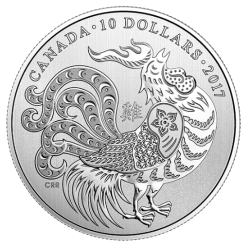 According to the Chinese zodiac, it's the Rooster who rules the roost in 2017! A natural performer who does well in the public eye, the plucky Rooster won't shy away from being the centre of attention. You're likely to find yourself admiring this attractive personality, who likes to look sharp and strut his stuff; but the Rooster is also quick-minded, witty and perceptive—he'll talk to you about anything with enthusiasm! The self-assured Rooster in your life is likely to be a resourceful and honest hard worker—one whose decisive nature will help keep things running smoothly and on schedule.

Designed by Three Degrees Creative Group, your coin commemorates the Year of the Rooster with a stylized depiction of a rooster. Detailed engraving recreates its familiar appearance and captures the essence of the animal's character: observant, resourceful and self-assured. Other symbolic elements are artfully incorporated into the design, including the gladiolus flowers that are traditionally associated with this sign, as well as and the Chinese character for "rooster".

Your coin is encapsulated and presented in a Royal Canadian Mint-branded maroon clamshell with a black beauty box.