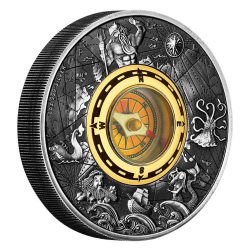 A compass is an instrument used for navigation and orientation. Magnetic compasses allow people to find their position relative to the Earth’s magnetic field. The magnetised needle of the compass indicates direction based on the four cardinal points – north, south, east, and west.

Struck by The Perth Mint from 2oz of 99.9% pure silver the coin is issued as legal tender under the authority of the Government of Tuvalu.
No more than 2,500 of the Compass 2017 2oz Silver Antiqued Coin will be released by The Perth Mint.

The reverse of this antiqued silver coin features an interpretation of an ancient world map with mythical sea creatures included in the design, as well as The Perth Mint’s traditional ‘P’ mintmark. A golden coloured compass is set into the middle of the coin and features an engraved rim.

The compass set into the middle of the coin forms part of the coin’s overall appearance and design. It should not be relied upon for navigational purposes.

Each coin is presented in a classic grey display case, within a stylised shipper, and is accompanied by a Certificate of Authenticity.