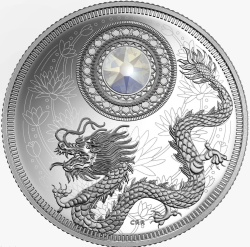 Sparkling in a dizzying array of colours, gemstones are believed to have heightened attributes during the month they represent. This monthly series offers a cross-cultural celebration of the powerful, symbolic beauty of birthstones, which are each as distinct and unique as those who cherish them!

Crafted from 99.99% pure silver. The reverse design by Three Degrees Creative Group is both visually compelling and richly symbolic, with a thoughtful melding of traditional and contemporary design elements. In the background, a beautifully engraved lotus pattern fills the reverse in a modern take on the blooms that traditionally symbolize purity of the heart and mind. A majestic, mid-relief dragon is brought to life through intricate engraving that recreates it in extraordinary detail; its presence also carries a strong meaning, as the dragon is a time-honoured symbol of power, strength and good luck in Asian mythology. Above it, a traditional circular motif bears a Swarovski® crystal embellishment that represents each month's birthstone.