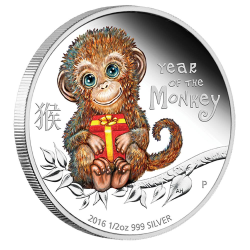 The coin’s reverse depicts a representation of a baby monkey sitting on a tree limb holding a present. The Chinese character for ‘monkey’, the inscription ‘Year of the Monkey’, The Perth Mint’s ‘P’ mintmark, and the 2016 year-date are also incorporated into the design.

The coin is issued as legal tender under the authority of the Government of Tuvalu and features the Ian Rank-Broadley effigy of Her Majesty Queen Elizabeth II and the monetary denomination on its obverse.