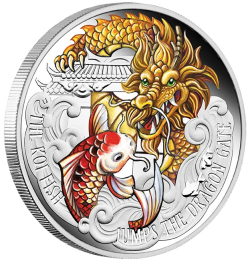 The Koi Fish Jumps the Dragon Gate coin is struck by The Perth Mint from 5oz of 99.9% pure silver in proof quality. The coin is issued as legal tender under the authority of the Government of Tuvalu.

The legend of the koi fish jumping the dragon gate is a popular and inspiring myth in Chinese culture.

The story tells of an enormous school of golden koi which swam upstream in the Yellow River in China. Gaining strength by fighting against the current, the fish glimmered as they navigated through the water. When they reached a waterfall at the end of the river, many of the koi turned back, letting the flow of the river carry them away. The remaining koi refused to give up. Leaping from the depths of the river, they attempted to reach the top of the waterfall, but to no avail. Their efforts caught the attention of local demons, which mocked their attempts and raised the height of the waterfall out of malice.

After a hundred years of jumping, one koi finally reached the top of the waterfall. The gods recognised the koi for its perseverance and determination and turned it into a golden dragon, the image of power and strength.

The reverse of the coin features a koi fish and a dragon in colour. The koi fish is jumping through the waves of the river over the dragon gate, and a dragon is wrapped around the roof of the gate. The design includes the inscription THE KOI FISH JUMPS THE DRAGON GATE.

The coin’s obverse depicts the Ian Rank- Broadley effigy of Her Majesty Queen Elizabeth II, the 2016 year-date, and the monetary denomination.