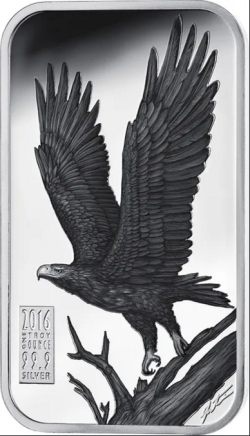 The Australian Apex Predators series celebrates the powerful skills and unusual anatomical features that enable these animals to stand apart.

The precision with which these animals hunt is matched by the detailed illustration in each piece. Meticulously reproduced in black and white, the defining attributes of the apex predators are revealed.

The first coin to be released in the Apex series is the wedge-tailed eagle, Australia’s largest bird of prey and among the largest eagles in the world. Its name derives from its distinctive diamond-shaped tail. With a broad wingspan reaching more than two meters, the wedge-tail soars into the sky, up to two kilometres above open areas of forest, on thermal drafts.

From this height, the wedge-tailed eagle uses highly sophisticated binocular vision that enables it to assess distances accurately and pinpoint prey. Its vision is enhanced by bony rings around the eyes that change the shape of the eye to enlarge images. The effect is that of a telephoto lens on a camera. Sighting prey, the wedge-tail swoops decisively.

Over thousands of years the wedge-tailed eagle has evolved into a formidable opponent. Hunting together, these eagles can prey on animals as large as adult kangaroos. With enviable pulling power, they can lift up to half their own body weight - making them a deadly opponent for live prey for whom their sharp claws and pointed beaks are no match. The wedge-tailed eagle feasts on fresh rabbits, kangaroos and small lizards, and it scavenges from carrion.

This coin depicts in detail the majestic wedge-tailed eagle taking flight. It also records the year of production, the signature of the artist Elise Martinson, and the coin’s weight and purity.

The obverse design includes the Ian Rank Broadly effigy of Her Majesty Queen Elizabeth II, as well as the country and date of issue, and the piece’s value in Cook Island dollars.

No more than 2,000 of the 2016 Apex Predators - Wedge Tailed Eagle 1oz SIlver Proof Coin will be released worldwide!