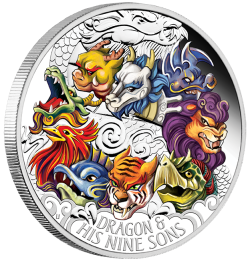 According to ancient Chinese mythology, the dragon is symbolic of good fortune. In Chinese culture the dragon is said to have nine sons, each of whom was endowed with a unique supernatural power. These appear in many aspects of architecture as well as forming part of daily life.

With a head resembling a yellow dragon, Qui Niu is often depicted on the head or bridge of traditional Chinese instruments. The eldest of the nine dragon sons, the Qiu Niu, is generally considered the patron of musicians and a protector of homes.

Ya Zi is highly aggressive and loves to fight. His bad temper and powerful nature sees him frequenting battlefields, and his appearance signifies victory in battle while enhancing the morale and strength of soldiers. His image is often carved on edged weapons to make them more powerful and accurate.

The fearless risk taker, Chao Feng has the head of a phoenix with the body of a dragon. His image is often used as embellishments on roof corners, particularly in ancient palace architecture.

Known for his loud crying, Pu Lao lives by the sea and is often cast as the handles on the top of a bell. He was afraid of cetaceous creatures such as dolphins and whales, and upon seeing a cetacean he would shout loudly in fear. It became a tradition for people to put his likeness on clocks with a carved wooden cetacean as the bell-striker in order to increase the vibration of the toll.

Suan Ni resembles a lion, loves fire and smoke, and can be found on incense burners and as a guardian in front of doorways. Associated with Chinese Buddhism, his profile can also be seen on the seats of the Buddha statues.

The Bi Xi dragon has the body and shell of a tortoise with the head of a dragon. Capable of carrying very heavy objects, his image is usually carved at the base of heavy stone steles, pillars and gravestones.

Bi An is known for his fairness and impartiality. Resembling a tiger, he is wise and can differentiate between good and evil, and honesty and lies. He is usually featured as part of the decoration of courts and prisons in ancient China. His images are ferocious and he has the appearance of a tiger with very large fangs.

Fu Xi has the head of a lion with a dragon’s body. Known for his love of literature, his image is often found in libraries and on book bindings, and depicted on graves and monuments.

Chi Wen lives in the sea and is said to control rainfall. He resembles a fish. The Chi Wen dragon image is often placed on the ridges of palaces and buildings to protect the building from fire.

The coin’s reverse portrays the dragon with his nine sons in colour. The design includes the inscription DRAGON & HIS NINE SONS.

The coin’s obverse depicts the Ian Rank-Broadley effigy of Her Majesty Queen Elizabeth II, the 2015 year-date, and the monetary denomination.

No more than 1,000 of the Dragon and His Nine Sons 2015 5oz Silver Proof Coloured Coin will be released.