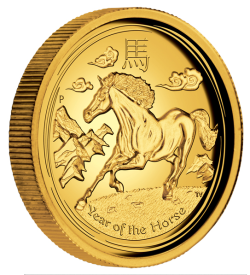 In 2014, The Perth Mint’s internationally renowned Australian Lunar Gold Proof Coin Series II celebrates the Year of the Horse, the seventh animal in the 12-year cycle of the Chinese zodiac.

Meticulously struck from 99.99% pure gold in proof quality, no more than 388 of these 2014 Year of the Horse 1oz Gold Proof Coins will be released as legal tender under the Australian Currency Act 1965.

The coin’s reverse depicts a horse galloping amid a stylised scene of mountains and clouds. The Chinese character for ‘horse’ and the inscription ‘Year of the Horse’ also appear in the design with The Perth Mint’s traditional ‘P’ mintmark.

The Ian Rank-Broadley effigy of Her Majesty Queen Elizabeth II, the 2014 year-date and monetary denomination are shown on the coin’s obverse.