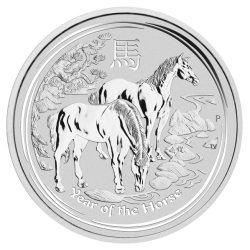 Meticulously struck from 99.9% pure silver in bullion quality, this coin is issued as legal tender under the Australian Currency Act 1965.

The Ian Rank-Broadley effigy of Her Majesty Queen Elizabeth II, the 2014 year-date and the monetary denomination are shown on the coin’s obverse.