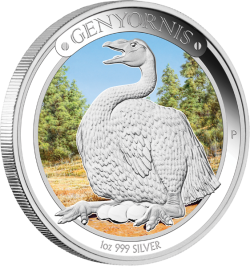 Peter Trusler is a world-renowned freelance artist and zoological science graduate from Monash University, Melbourne. Trusler holds a special interest in biological illustration and is a founding member of the Wildlife Art Society of Australasia. The artist’s work is highly regarded and has been published around the world, in print media, books, medical and scientific journals, posters and stamps. Collections of his work are held in both national and international archives, most notably, the Australia Post Philatelic Collection, Melbourne; Museum Victoria, Melbourne; and the National Geographic Society Collection, Washington.

This remarkable series goes back in Australia’s history to discover the larger-than-life animals that once roamed our land, with the third release depicting the Genyornis.

The Genyornis is a giant extinct bird that was part of a range of megafaunal creatures, which inhabited Australia during the Pleistocene period.

The coin’s reverse depicts a Genyornis set against a coloured background. The inscription GENYORNIS, the coin’s weight and purity, and The Perth Mint’s ‘P’ mintmark are also incorporated into the design.  The coin's obverse depicts the Ian Rank-Broadley effigy of Her Majesty Queen Elizabeth II, the year-date and the monetary denomination.