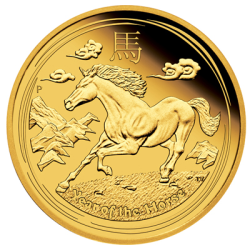 The reverse of coin depicts a horse galloping amid a stylised scene of mountains and clouds. The Chinese character for ‘horse’ and the inscription ‘Year of the Horse’ also appear in the design with The Perth Mint’s traditional ‘P’ mintmark.