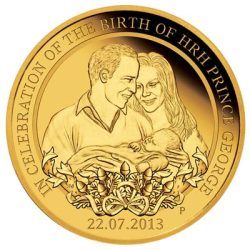 On 22 July 2013, Australia joined the United Kingdom in celebrating the birth of the new Royal Baby, Prince George Alexander Louis of Cambridge.

Following the registration of his birth, the Home Secretary and the Queen’s Private Secretary officially informed State and Commonwealth representatives and overseas dignitaries of the presence of the future King.

Celebrating the birth of His Royal Highness Prince George Alexander Louis, the Perth Mint released no more than 1,000 of the HRH Prince George 2013 1/4oz gold proof coins to commemorate the occasion. Issued as Australian Legal Tender.

The coin’s obverse depicts the Ian Rank-Broadley effigy of Her Majesty Queen Elizabeth II and the monetary denomination.

The reverse of the coin depicts a beautifully sculpted portrait of the Duke and Duchess of Cambridge cradling and gazing lovingly at their newborn baby.  The image is encircled by a sculpted ribbon tied in a bow supporting a delicate bouquet of acorns and fleur de lys – symbols from the Duke and Duchess’ Coats of Arms. The inscription IN CELEBRATION OF THE BIRTH OF HRH PRINCE GEORGE, the birth date and The Perth Mint’s ‘P’ mintmark are also included in the design.

Each coin is accompanied by a numbered Certificate of Authenticity and housed in a prestigious display case and illustrated shipper.