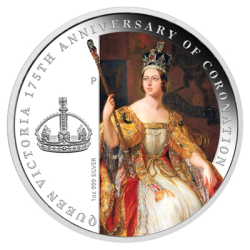 The Perth Mint has released a stunning 1oz silver coin to commemorate the 175th anniversary of Queen Victoria’s Coronation.  The longest reigning British monarch, Queen Victoria ruled over the United Kingdom of Great Britain and Ireland for more than six decades.

The coin’s reverse depicts a coloured portrait of Queen Victoria at her Coronation by Sir George Hayter, which forms part of the prestigious Royal Collection.   An image of Queen Victoria’s Diamond Crown, the inscription QUEEN VICTORIA 175TH ANNIVERSARY OF CORONATION and The Perth Mint’s ‘P’ mintmark are also included in the design.