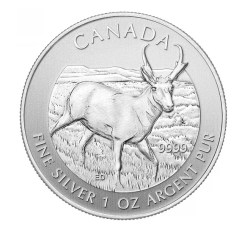 In 2013, the Royal Canadian Mint revealed that the Canadian Silver Pronghorn Antelope Coin would be newest addition to their Wildlife Series. As with other coins in this line, only a limited number of them were minted, which makes these new non-circulated coins offered a rare and valuable find among coin enthusiasts. Each coin is made from 1 ozt. of the highest quality 99.99 % pure silver with a diameter of 38 mm and a width of 3.29 mm. It also carries with it a face value of $5 CAD. This exceptional piece is certain to add value and charm to any coin collection.

For its fifth coin, the Wildlife Series turned to Canada’s rural prairie and its animal inhabitants as sources of inspiration. The front side of the coin beckons to our sense of adventure by featuring a swift pronghorn antelope charging across the meadows. From the swaying grass in the backdrop to the antelope that literally appears to leaping out of the coin, the utilization of angles and perspective to create the illusion of movement in this picture is breathtaking. The realistic details are enough to make a person feel though they were galloping alongside this magnificent creature. Collectors cannot help but admire the level of craftsmanship it took to bring this piece to life. The reverse side proudly displays the profile of Queen Elizabeth II.