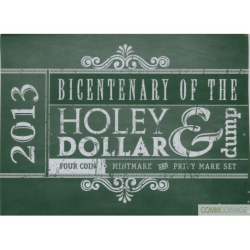 To commemorate 200 years of a nation’s first official currency, the Royal Australian Mint’s 2013 mintmark and privymark coin program will feature a replica of the Holey Dollar and Dump as the basis of design.

Each four coin set includes C Mintmark, B S M Privymark. The Holey Dollar and Dump were introduced to stamp out the corrupt rum trade and provide the first official currency for the fledgling colony of New South Wales.

In 1812, Governor Lachlan Macquarie arranged for a special shipment of 40,000 Spanish dollars to arrive in Australia and set pardoned forger William Henshell to work fashioning the new currency.

Henshell was able to develop his own minting technology with the limited resources of the colony at the time and he marked his work by placing the initial ‘H’ on some of the dies produced.

Now rare and valuable, the original coins were in circulation between 1813 and 1829.