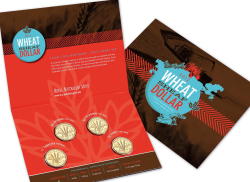 The 2012 uncirculated mintmark and privy mark four coin set pay homage to the pre-decimal Australian ‘Wheat Sheaf’ threepence. The Wheat Sheaf design, which appeared in circulation from 1938 to 1964, continues the focus on rural industries and Australian pre-decimal currency that began with the 2011 Ram’s Head Dollar.

The original George Kruger Gray designed threepence features on the mintmark and each of the Sydney, Brisbane and Melbourne Privy marks.