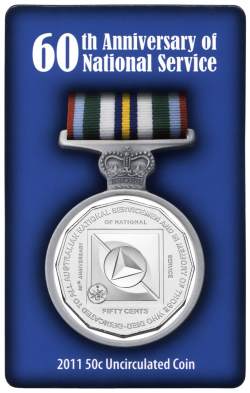 In September 2010 the newly constructed National Service Memorial will be dedicated at the Australian War Memorial. The Royal Australian Mint marks this event, and the upcoming 60th Anniversary of National Service, with the release of this coin. Between 1951 and 1972, a total of 287,000 young Australian men were called up in two separate schemes for compulsory training in the Navy, Army and Air Force. Of them, 212 died on active service in Borneo and Vietnam. National Service was part of Australia’s defence preparedness for three decades. This is certain to be a proud addition to any 50c coin collection, presented in card format as with previous RAM 50c coin issues.