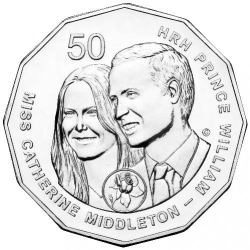 Celebrating the Royal wedding of Prince William and Kate Middleton on April 29th 2011 this Australian 50c is sculpted by Royal Australian Mint designer Vladimir Gottwald using images of the couple as his inspiration.

The 50c unc will be displayed in a credit card-sized card similar to the 50c Unc Royal Engagement coin that has just been released.