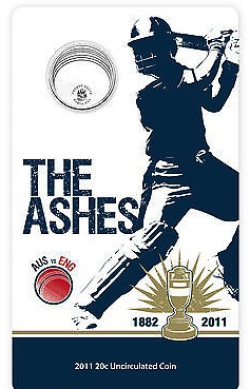 The great Sir Donald Bradman said "Test Cricket is not a light-hearted business, especially that between England and Australia".

This sporting rivalry has been alive since 1882, the Ashes test series is the backbone of Australia's cricket calender and part of our national culture.

Played during the summer months of each nation, the 2010-2011 series will return to Australian shores, the first test being played at the Gabba in Brisbane from 25-29 November 2010.

This stunning example of cricket regalia, features a coin with a stitched motif, representing a cricket ball, presented in a full colour card.

A memorable 20c addition to any collection.