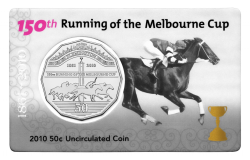 To commemorate the 150th running of ‘the race the stops a nation ™’,  Royal Australian Mint and the Victorian Racing Club, are releasing these coins as part of a year-long celebration. In spite of its humble beginnings, this race has grown to become one of the biggest annual sporting events in Australia and one of the most prestigious horse races in the world. The 1861 race had seventeen starters and was run before a crowd of 4000 spectators. Today, it is broadcast to an audience of around 700 million people worldwide. The Melbourne Cup has become such an integral part of Australian culture that it is almost impossible to imagine the country without it. Since 1861, the world’s greatest 3200 meter handicap horse-race has been run every November.

To commemorate this anniversary, the Royal Australian Mint has produced this stunning  50c cupro nickel uncirculated coin. The reverse of the 50c uncirculated coin captures the pivotal moment of riders and horses crossing the winning post.