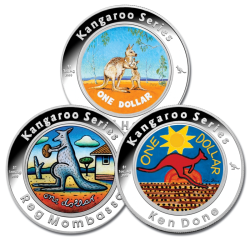 Since 1993 the Royal Australian Mint’s Kangaroo Series has celebrated an iconic national symbol with an annual release of stunning coins. In 2006 the Mint launched the Great Australian Artists Series and invited three prominent Australian artists to design coins featuring the kangaroo.

The Mint invited Rolf Harris to develop a kangaroo design which launched the series in 2007. His ‘mother and joey’ design was followed by Reg Mombassa’s football playing kangaroo in 2008 and Ken Done’s 2009 outback inspired creation.

Each artist has applied their own unique style and personality to their respective coins. These 1oz silver coins are brought to life in the colours as supplied by each artist, which offers a visual delight that wasn’t available through the previously released coins of the same design. Each set features three easels for coin display