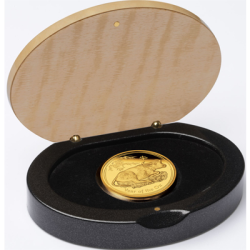 The reverse of each coin depicts an ox lying on grass with bamboo branches above.  As well as the inscription ‘Year of the Ox’ and the Chinese character for ‘ox’, the design also incorporates The Perth Mint’s ‘P’ mintmark.