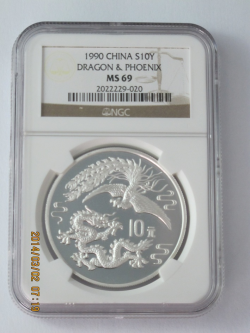 The dragon phoenix and unicom were three mythical creatures of ancient China. Legend has it that the snake-like dragon , armed with scales and bear paws, could summon wind and rain and that the phoenix was the king of the birds. Of course ,both the dragon and phoenix were created by the ancient Chinese on the basis of their imagination , rich life experiences and feelings .In the past few thousand years the art and legends related to the dragon and phoenix have often been enriched and improved ,thus becoming deeply engrained in Chinese culture .The description "Descendants of the Dragon " is a traditional name for the Chinese people, while the phoenix has become the symbol of happiness, an ideal and aspiration for the people of all nationalities .In ancient  times the Chinese regarded the dragon and phoenix as symbols of prosperity、peace、luck and happiness.